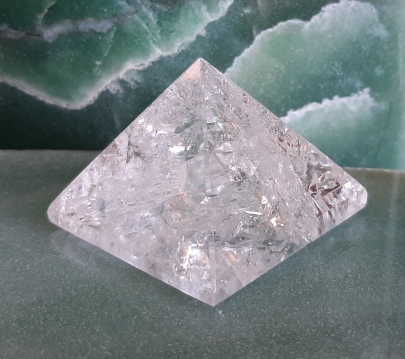 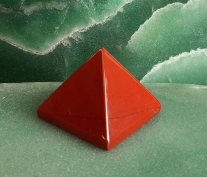 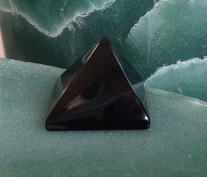 Pyramids are amongst the most iconic structures in the world. There are thousands of pyramids located throughout the world with over one hundred found in Egypt. All of these pyramids were created without advanced tools. There is deep symbolism associated with pyramids that date back centuries.

In many cultures, pyramids provide and represent a sacred space, even church steeples embrace a pyramid shape. Native Americans used tipis for sacred ceremonies, believing the circular pyramid shape connected them to the Earth below and the Heavens above.

Today, pyramids continue to be held with high esteem. Pyramids have the ability to channel and collect energy from the Higher Realms. The bottom of the pyramid represents a solid earth base, whilst the points project energies to the four directions and heavens. The combined energies of the heart from the base, the four elements and directions from the four points and the point to the heavens are harnessed within the pyramid. 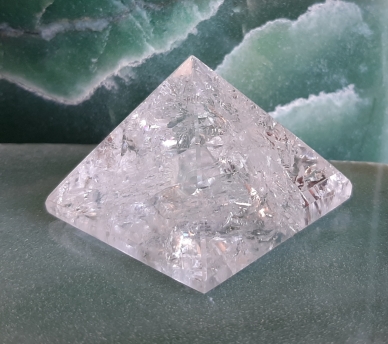 Clear Quartz has been valued throughout history as a master healer by many civilizations. In Atlantis and Lemuria the sun’s power was used as a source of solar energy refraction ie. the bending of light through crystal pyramids.

A Clear Quartz Crystal Pyramid will absorb negative and undesired energies and clear the way forward. It will assist the holder to release, regulate, and amplify their energy.

These clear quartz pyramid pieces are full of natural light and rainbows and measures approx 4.5cm across the base. 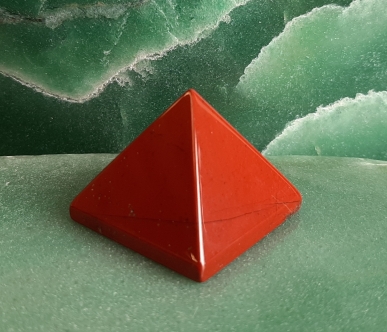 Red Jasper works on the base chakra by opening, clearing, rejuvenating,  and strengthening your energy from within. This energy known as life force or chi energy,  works its way up the body aiding in manifesting positivity and aids to bring about your hopes and desires.

This vibrant red pyramid measures 3cm across the base. 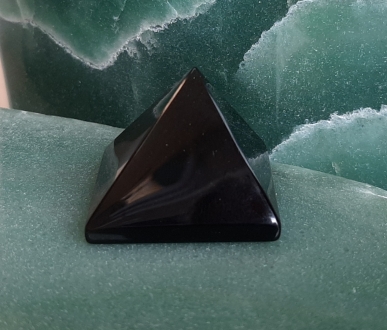 Rainbow Obsidian is helpful in dissolving unwanted ancestral patterns to allow a clearer passage into the new. Known as a master transmuter of negative or undesired energies to positive the rainbow obsidian is amplified to higher vibrations when combined with the pyramid shape. Rainbow obsidian is formed from cooling lava and works from your base chakra upwards, inviting joy and rainbows as it goes. Many utilize this combination to uplift energies particularly, when dealing with depression.

These pyramids measure 3cm across the base.

Merkabas are often used as a creative visualization tool that acts as a vehicle to travel to higher dimensions in meditation. The sacred shape is said to offer protection and heightened connection to the spirit above and the physical or earth below. 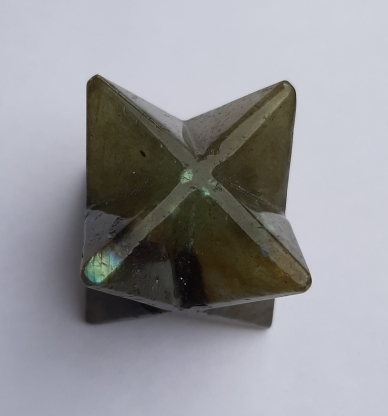 Labradorite is a stone of magic that is often used to increase psychic abilities and intuition. The labradorescence is reflective of the refractive index range and can incorporate many colours. Labradorite heightens vibrations and is a stone of transformation, many carry this crystal when traversing times of change and transition. A protective stone, it unites the spiritual with the earth and balances energies by raising the holder’s vibrational frequency.

A labradorite Merkaba is the crystal companion for energetic protection during transformation and invites balance. This combination is often used for meditation.

Did you know that crystals will help reduce any level of stress from minute and up. Amethyst stimulates the throat and heart chakra bringing about a calming effect. It clears the aura providing stability, strength and peace. Knowing the healing benefits of any crystal is immaterial, general or none at all is fine. If you love something and like to look at it or touch is perfect. Stress will create all types of things that are not required. Enhance your work space or home is the best thing anyone can do and feel the difference. #amethyst #crystallove #selflove #crystalwisdom #xmasgift #selfhealers #christmasgifts
What can you see inside the same citrine lemurian after this mornings walk and ocean frolic? I see a dolphin playing. When you see something inside a crystal relate that to your personal life. Share your thoughts below. When you find something in a piece we automatically shift our focus to the heart where we feel better. The heart is the place to be. Contact direct to purchase. #citrinelemurian #heartmagic #byronandbeyond #byronhinterland #onlineshopping #selflove #xmasgift
Early this morning in my dream a citrine lemurian came to me, emphasing striatians. When it was realised the civilisation Lemuria was going down, information was encoded into the crystals in the striatians. By working with a piece this information is accessible. These particular striatians are well defined and difficult to photograph (for me anyway). This citrine lemurian is solid and very loving and contains many rainbows. Look on the face underneath the striatians to see the eye. You don't have to know the ins and outs, just trust yourself and feel happy about that. #citrinelemurian #heartmagic #byronandbeyond #byronhinterland #onlineshopping #selflove #xmasgift
My new friend and I had the pleasure of walking, swimming, manifesting and being in gratitude at the time of this mornings full moon in Pisces. As a side note, heavy clouds, wind and rain arrived briefly and we found ourselves lone beachgoers. Spending time asking and thanking the Universe is extremely beneficial. What do you think? #pisces #piscesfullmoon #onlinegifts #onlineshopping #online #birthdaygifts #byronandbeyond
May you spend the weekend enjoying your created rainbows. Keep your heart open, senses on alert and gratification for what has come your way and something may just come , out of the blue. Whilst I was writing this, something did happen out of the blue for which I am grateful. #citrine #heart #rainbows #byronandbeyond #online #byronhinterland #specialgift
This laser quartz and I have been having some well deserved rest and relaxation every day for a while now and for some reason I just have to take it, no questions asked. This morning we were gifted this large feature. At the time I didn't know what the feather meant but I certainly do now. I love what I do. Do you love what you do? Contact direct to purchase. #laserquartz #byronandbeyond #newbeginnings #lennoxhead #byronhinterland #bangalow #selflove #specialgift